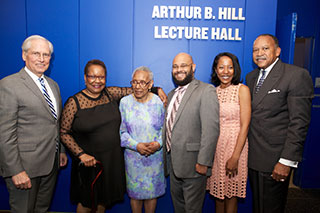 August 2017 – The late Arthur B. Hill was a founding member of the MARCH Foundation. His legacy continues.

Arthur Hill ’66, MPA ’73, was a prominent John Jay College alumnus, having received both his B.A. and M.P.A. from the College. Through his 27 years of exemplary service in the New York Police Department, he left an indelible mark on the community. He retired as Assistant Chief Inspector in 1973, and over the years received numerous awards, commendations, and citations for his law enforcement work and community service.

During the course of the ceremony, thoughtful remarks by Travis, Tucker, and Goff reminded the audience of the fragile time period during which Hill served – the late 60s and 70s when the city was torn by racial tension and desperately in need of compassionate leadership within the police department and local communities. Hill, one of the very first graduates of John Jay College and among the first African Americans to hold a leadership position in the NYPD, set the example for that type of leader.

Commissioner Tucker, also an alumnus, BS ’77, described the moment he first encountered Hill back in the 60s, when he was a young officer on desk duty at the 81st precinct in Bedford–Stuyvesant, Brooklyn. When Hill marched in to take over as commanding officer, cigar in hand and a look of determination on his face, Tucker said, “It blew my mind. Knowing that we were going to have a black man as Assistant Chief was extraordinary.”

Joanne Hill, a trustee of the Arthur and Patricia Hill Foundation, said she first conceived of the idea of memorializing her father at John Jay five years ago, when she ran into President Travis in their home neighborhood of DUMBO. The feeling of finally seeing his name up on the wall was “Unbelievable,” she said. “I can’t even explain how exciting it is.” She added that being able to support the College and the CPE’s new LEAP initiative was the perfect fit. “It’s a very happy time for the Hills.”

The CPE works collaboratively with law enforcement, communities, and political stakeholders to identify ways to strengthen relationships with the communities they serve. Dr. Goff, the inaugural Franklin A. Thomas Professor in Policing Equity at John Jay, is the co-founder and president of the CPE, and an expert in contemporary forms of racial bias and discrimination, as well as the intersections of race and gender. He describes justice as a second language, and said, “One of the major goals for CPE is developing a language that helps both my generation and the next generation make sense of where we ended up.”

The CPE is the largest think tank in the world that looks at race and policing, and will implement the LEAP initiative to train students through research and experiential learning to allow them to become champions of justice. Said Goff, “We’re hoping the LEAP program allows us to get really committed, talented young folks who want to come in and get exposure to how justice is being produced, so they can help us do that better.”

Interested students can get involved by applying for a paid internship with LEAP, and they can also volunteer in the lab or take an independent study for credit.

“A lifelong fierce advocate for justice, Arthur Hill embodied John Jay’s core values as he helped to shape a better New York City for all,” said Joanne Hill. “By providing support for the LEAP initiative, we are helping Dr. Goff provide an incredible and practical learning experience for John Jay students who are committed to being leaders in the field of criminal and social justice reform.”

May, 2022 | Categories: Black Voices From Big Brown, Board members